God Is In The Fire 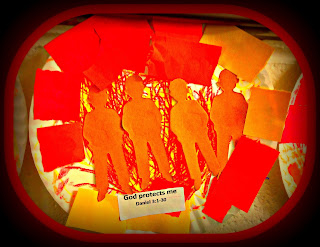 Last week I was in the middle of Chapel telling the story of Shadrach, Meshach, and Abednego when God spoke to my heart.  It kind of took my breath away.  I was standing before our smallest children at the pre-school where I work, and I was choked up in the worst kind of way.  I had gotten to the part where King Nebuchadnezzar had thrown the Hebrew children into the furnace because they refuse to bow down and worship his golden statue.  And he looked and, lo, there were not three people in the furnace.  There were four.

GOD IS IN THE FIRE.

I have been in the fire the last few weeks.  It has been hard.  I have felt every insecurity, every doubt from the very beginnings of my life, each one creeping up with the taunting audacity to suggest that doubt and insecurity can never really go away.  The lies have felt so true, the ones that suggest my life doesn't matter, my brokenness cannot be mended, my truest self will only scare the people I love away.

One of my favorite songs from the 80's is Billy Joel's "We Didn't Start the Fire."  It's true, the fire is the tool of the enemy sent to destroy--to steal, kill, and destroy.  It was true when the enemy prompted Nebuchadnezzar to heat up the furnace and it is true now every time the enemy causes or piggybacks on misfortune, whispering lies to the vulnerable heart, keeping his prey defeated, discouraged, and despairing.

God doesn't cause the fire.  But God is faithful to meet us there.

I'm thinking of people I know who are surviving difficulties that are hard to imagine and explain.  Grief that rends hearts with the velocity of hurricane force winds.  Tenuous circumstances that isolate.  Unwieldy messes that seem impossible.  I peek into difficulties other than my own.  I tremble to speak the truth even there, but I know it is still true.  God is faithful to meet us in the fire.  If we are courageous enough to seek Him, to not allow the lie of the enemy to deter us, we will find Him.  He will walk with us through the fire.  He often does not keep us from the flames, but He finds a way to keep us within them.  And He is faithful in finding a way to lead us out of them too.

He has been keeping me.

A dear friend of mine likes to remind me that the only things  burned in the fiery furnace were the ropes that bound the Hebrew children.  I also know that the Hebrew children were willing to face the fire regardless of whether God saved them or not.  It was worth it to them to worship God only.  Either way, they found freedom in the fire.

Through the years I have found it too.  God has used the fires in my life to set me free, to show me that He alone is worthy of my heart's trust.  Anything else will destroy me.  But resting in Him, even when I feel everything consumed around me and within me, I come out on the other side sturdier, purified of things I couldn't get out of my system any other way.

I don't mean to glorify the fires in our lives.  And don't go looking for them!  Just like I said to the smallest of the smalls in my care that day in chapel, fire burns; it is dangerous!  Do not touch it!  But any encounter I have had with God in the fire has changed me.  Not necessarily the fire itself, but the encounter with God.  It's like I don't have the energy left to protect myself from God anymore.  I'm more willing to be clay in His hands.  I'm desperate even for the help only He can give.  And that help changes everything.  His help changes me.  I would never choose to walk through fire.  But I treasure every gift of God's touch that the fire afforded.

So I guess this is my way of saying we don't have to face the hard things alone.  God is with us.  Especially where no one else can be.  And God's power in a surrendered life can do amazing and remarkable things.  Let us encourage one another with this truth.
Posted by Sami Wilson at 1:40 PM

Sami Wilson
Kentucky, United States
I am a preacher girl. In 1998 I entered full-time ministry. This ministry journey has taken me all kinds of places. I’ve served as youth minister, associate minister, and campus minister. I’ve worked with senior adults, teenagers, college students, and children. But the deepest calling of my life has been to the very ordinary job of being a mom. In 2011 God moved me out of full-time minsitry and into a place where I could give my whole heart to mothering three very active boys. But I'm still the preacher girl. Over the last few years God opened a door that led me to a ministry of preaching to pre-schoolers. Each week I share God's Word in the most lively way possible. And it often feels like all those other years of experience have been preparing me for this. So I am laboring in the fields of my own family and among the smallest of the small. I am still the preacher girl who sees God’s WORD alive in every bush. It’s just that following those burning bushes have taken me on a much less traveled road. Welcome to the journey. It is certainly joyful, kind of messy, a little outrageous, and definitely full of Grace.